Rep. Graham Filler announced today he is running for re-election to a third term in the Michigan House of Representatives in the newly drawn 93rd district that spans Clinton, Gratiot, Ionia, Montcalm and Saginaw Counties.

“I am running to continue fighting for the hard-working people of mid Michigan,” said Filler. “Mid Michigan is my home and I believe in our region, its people and its potential. Since taking office, I have worked hard to achieve meaningful results such as lowering the cost of car insurance, increased public safety funding, fighting to help small businesses stay open, and prioritizing funding for roads and infrastructure improvements. While we have accomplished a lot, there is much more work to do to fix government and lower the cost of living.”

A former Assistant Attorney General for the state of Michigan, Filler was elected to the Michigan Legislature in 2018 and was quickly appointed Chair of the high-ranking Judiciary Committee as a freshman legislator – a leadership post he still serves in today. Since taking office in 2019, Filler has stayed accessible by holding regular local office hours and consistently holding virtual office hours for
those who couldn’t meet in-person.

“I believe elected officials should work just as hard as the people they represent. That is why I have done my best to remain accessible in order to listen to residents’ concerns and help find solutions.”

Filler was born and raised in Clinton County and graduated from Ovid-Elsie High School. Graham and his wife, Alicia, are active volunteers in their community along with raising their three year-old daughter, Claire, and anxiously awaiting the birth of their second child due in June. He is seeking the Republican nomination in the August 2nd primary election. For more information, visit
www.GrahamFiller.com.
### 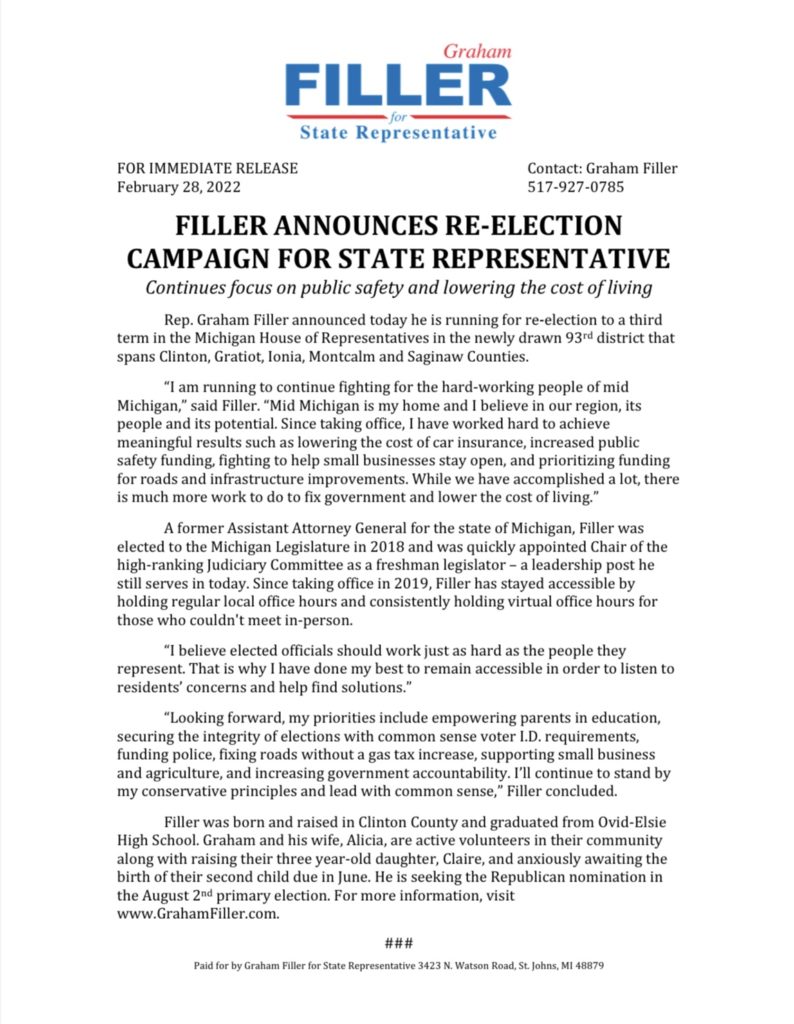